Mudgee ... It's a Wine Region in Australia!

I post this in the midst of the horrible destruction of human and animal life as well as property caused by the catastrophic bush fires in Australia. In October 2019 when I visited, the drought concerns expressed by the vintners in the Hunter Valley and Mudgee wine regions caused me to worry about the future of this beautiful place, and my fears have now become real. I dedicate this post to the people and wildlife of Australia and hope that this terrible situation is resolved soon.


As my post-conference excursion for Wine Media Conference 2019 in Hunter Valley Australia, I jumped at the opportunity to go to the neighboring wine district called Mudgee. With a name like that, I couldn't resist!

The name Mudgee comes from the Wiradjuri term "Moothi, and translates to "nest in the hills." The Wiradjuri are a group of indigenous Australian Aboriginal people who thrived in Central New South Wales before the arrival of European settlers in the early 1800s.

Mudgee, a small-ish wine area about 3 hours northwest of Sydney, is touted in New South Wales Wine Country, published by Destination NSW in partnership with the NSW Wine Industry Association, as a culinary epicenter, brimming with top-rated restaurants and farmers markets providing a broad range of seasonal produce and local food products. Honey is another main attraction, with small family operations producing wild honey and honeycomb products with fragrance and flavors unique to the local terroir .... sounds a lot like wine, doesn't it?

And speaking of the wines, which is the point of my writing and the main reason for my trip to Mudgee, they were a surprisingly interesting and delicious revelation for me. After several days of focusing on the Semillon (see my previous post) and Shiraz of the Hunter Valley, it was nice to sample some of the other grape varieties that Mudgee offers, like Riesling, Sauvignon Blanc, Tempranillo, and Sangiovese. And like neighboring Hunter Valley, there are also excellent Semillon and Shiraz being produced in Mudgee.

Our first stop on the drive from Hunter Valley to Mudgee was breakfast at Hollydene Estate Wines in the Upper Hunter Valley.

Being a weekend destination for Sydney and surrounding areas, many wineries in Upper Hunter and Mudgee offer food and lodging options. Hollydene has a stunning restaurant and grounds that are conducive to weddings and romantic dining experiences.

Their wines range from sparkling Blanc de Blanc called Juul (not the e-cigarette!), which was delicious with the beautiful breakfast buffet Hollydene served, to Semillon, Riesling, Sangiovese, Tempranillo, Shiraz, Verdelho and Muscat. Quite a lineup! This was a great stop on our way into the heart of the Mudgee valley.

Our intrepid driver Ben of Mudgee Tourist Bus took us up and over the Blue Mountains to the stunning Mudgee valley.

Our first stop in the "nest in the mountains" area of Mudgee was at Robert Stein Winery  (prounounced Steen) -- which is home to acres of vineyards, a winery, a motorcycle museum, and the exceptional Pipeclay Pumphouse restaurant.

We had a divine, languorous lunch made by Pumphouse Chef Andy Crestani, with each course paired with the gorgeous wines of winemaker Jacob Stein, grandson of the founder Robert Stein, the motorcycle enthusiast who established the winery in 1976. Stein's wines included Rieslings, both dry and half-dry, a saignee rose, cabernet sauvignon, chardonnay, and my favorite, "The Kinnear," which is 100% hand-picked Shiraz, and named after the ship that brought the first Stein, Johann, to Australia in 1838. I'm saving my bottle of this for a very special occasion.

Since that first Stein arrived on Australian shores in the early 1800s, along with many other German immigrants, the family has been growing grape vines. There is a long and rich family history at Stein Family Winery. 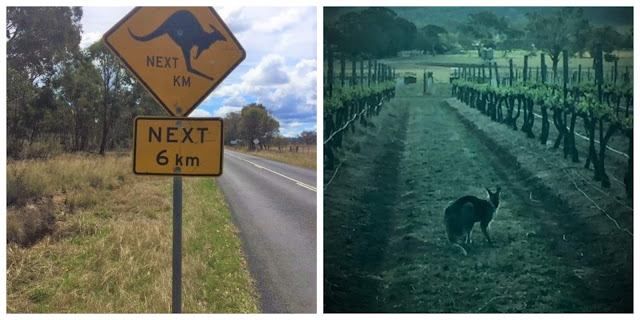 A surprise revelation on the Mudgee tour was about Kangaroos. Being from the US, I had never seen one before, and assumed that they were a sacred animal in Australia. Well, they are and they aren't. Kangaroos are a national symbol, adorable (from afar), and definitely a tourist attraction, but to Australians they can be a nuisance, the way that deer can be in the US, causing car accidents and property damage. In fact, my first Kanga sighting was of a "sleeping" one (our driver Ben's description) on the side of the road (ugh!).

Depending on who you speak with, the Kangaroo population is out of control. Vineyard managers do not love Kangas, as they eat grapes and they are dealt with as any pest in a vineyard. I saw Kanagroo pelts in the Queen Victoria Market in Melbourne, which was my first realization that they are hunted. And Kangaroo meat is consumed in Australia. Our lunch at Pipeclay Pumphouse included a course of  Kangaroo tar tar ... a dish I tasted, but chose to leave for others to consume.


The Cellar by Gilbert 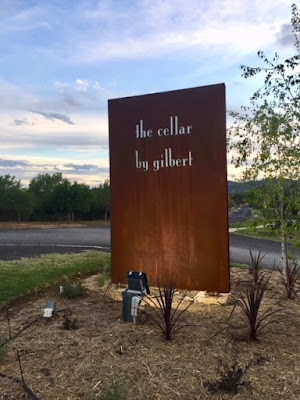 This is another Australian wine family whose roots go back generations in the wine industry. Our host on this visit was Will Gilbert, the current wine-maker, along with his father, who represent the sixth and fifth generation of Gilberts in the wine business. Our delightful evening including samples from Gilbert's current and library selections, paired with  gorgeous platters of delectables from High Valley Cheese Co.

Will delighted us with his fresh, modern approach to wine making and his family history. The Cellar was founded in 2004 in Mudgee by Will's father Simon, however the wine-making Gilbert family got its start in the Eden Valley of South Australia. The family founded the iconic Riesling maker Pewsey Vale Vineyards.

Will epitomized the youthful, experimental new generation of wine makers that I'm seeing in just about every wine region I visit. He was enthusiastic about trying new grape varieties and clonal selections, as well as experimenting with various vinification methods -- orange wines, carbonic maceration, pet nats -- while at the same time respecting and preserving traditions handed down to him over the generations. I especially loved his 2018 Sauvignon Blanc Sur Lie. And not to be pigeon-holded, Will also produces ciders.

I'm a huge fan of Aussie and New Zealand TV, and have been known to binge watch my favorites for hours. In one of them, called The Heart Guy (called Doctor Doctor in Australia), I've always been captivated by the gorgeous landscapes and quaint downtown area. Well it turns out this show is filmed in Mudgee, and I was staying in the Perry Street Hotel, one of the best-appointed boutique hotels I've ever been in, which was in the opening shot of a recent episode of the show!

Mudgee's town center looks like a cross between Mayberry RFD and a California Gold Country town. It's got charm, with cute little shops, church spires, and comfy hotels along with a more rugged, outdoorsy grit. It's a thoroughly pleasant place to spend a few days.

Alby +  Esther's is one of the charming, must-see spots in town, and we enjoyed a hosted breakfast on our first morning in town. The cafe is tucked into a cobblestoned alleyway in a building that dates back to the 1870s, and is full of charm and friendliness. The locals and visitors mingled while we enjoyed local (fantastic) fare in a private, art-filled dining room.

Mudgee Region Tourism and Mudgee Wine Association are doing a terrific job attracting tourism to this lovely part of the world. Currently, however, only about 4% of tourists to Mudgee are international travelers, says Cara George CEO of Mudgee Region Tourism. One of the goals in hosting US and other international wine writers was to spread the word about Mudgee, its wines and its abundant attractions, and I happily do so.

Having been there, I can say it feels like an undiscovered gem. It's got everything going for it, except rain right now.

Here's hoping that the storm clouds roll in and preserve this beautiful part of the world.

Until next time,
Cheers 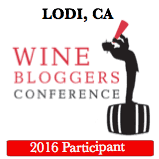